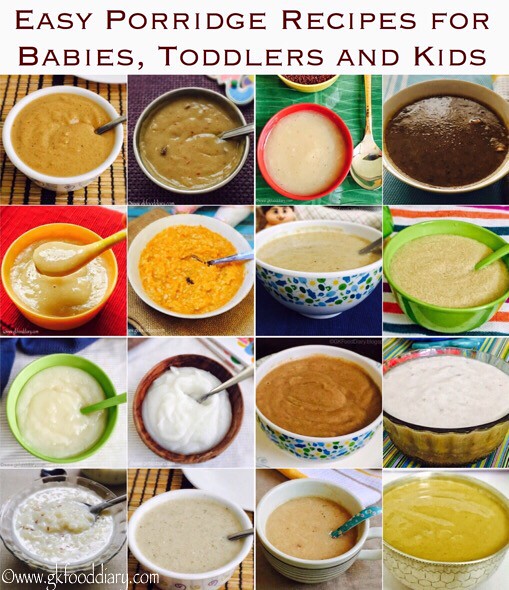 23 Easy Porridge Recipes - Porridge is an easily digestible nutritional food for people of all ages, and surely it makes deliciously healthy food for babies as it has a smooth structure and comforting to the taste buds for the little ones. Porridges are not only meant for the first food for babies but also best to offer them when your child is sick or fussy about food.

Here are some healthy, easy to make porridges for babies, toddlers, and kids. Also, check out our collection of homemade baby food recipes for 6-12 months if interested.

Bookmark this page for future reference as I will be updating this post regularly. Click on each thumbnail image given below for the porridge recipes. Choose recipes according to your baby's age, which is mentioned in the brackets along with recipe heading.

Points to note while preparing porridge for your baby:

Rice porridge is an ideal first food for babies as it's easily digestible and less likely to cause allergic reactions. This rice porridge recipe is prepared with homemade rice cereal and also is best to offer when the child is sick as it gives instant energy. 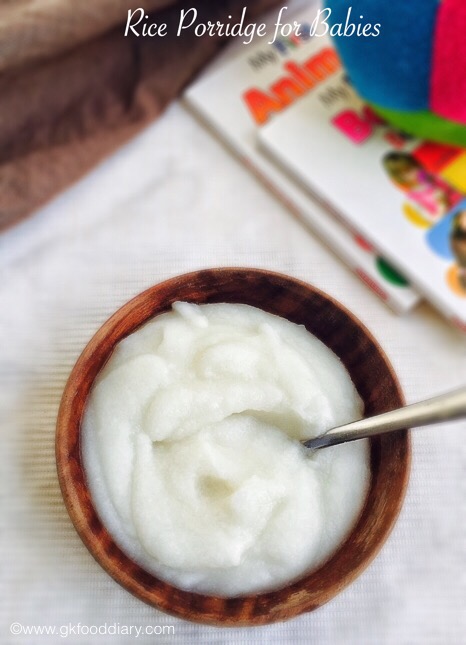 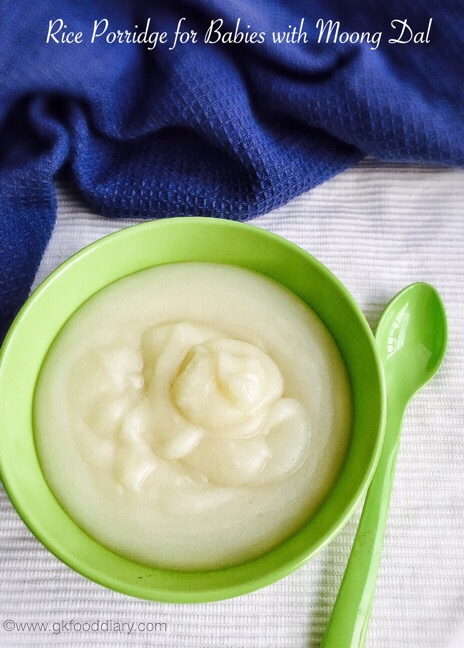 Barley is loaded with nutrients and make great food for babies because of its smooth texture. This barley porridge is prepared with homemade barley cereal, apple, and banana to have a natural sweetness. Be sure to feed your baby with barely in moderation if your family has no history of allergy to gluten. 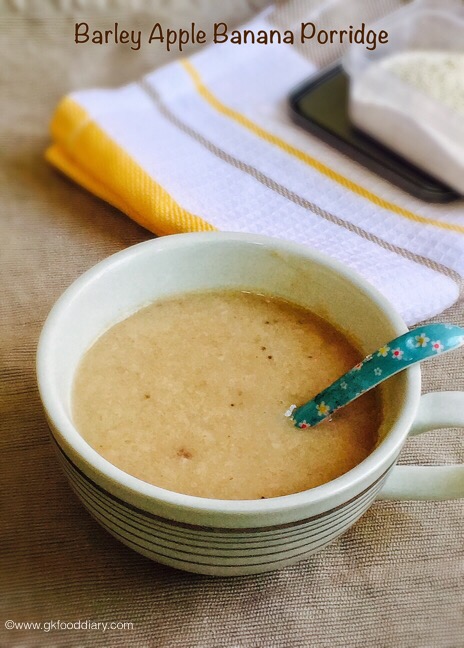 Ragi, aka finger millet, is healthy food for babies as its rich in calcium and iron. This ragi porridge is prepared with whole ragi seeds by soaking the seeds, grinding, and extracting the milk out of it. Hence its husk free and safe for small babies when you introduce ragi. 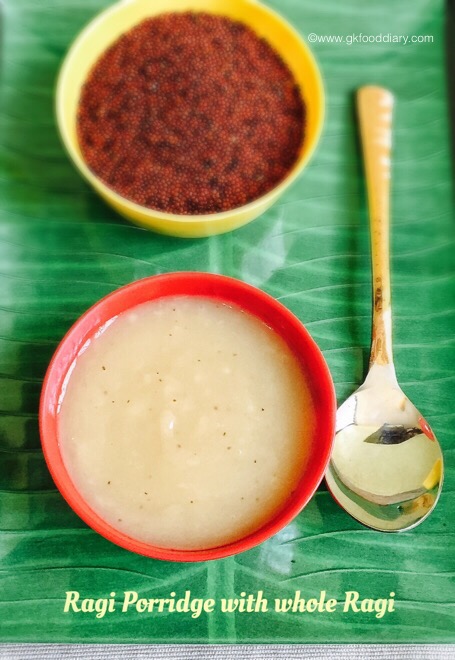 This ragi porridge is made with homemade sprouted ragi powder, which is easily digestible and rich in nutrients. You can make this ragi porridge with milk for toddlers and kids instead of water. 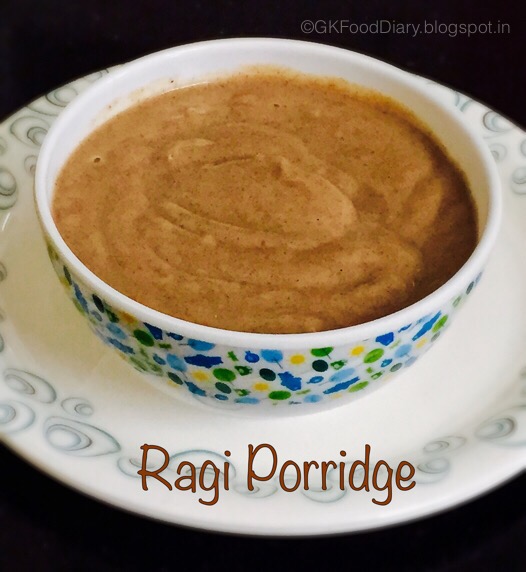 A healthy combination of porridge with sweet potatoes poha and raisins loaded with vitamins and fiber. This sweet poha porridge is a wholesome and filling porridge for your baby! 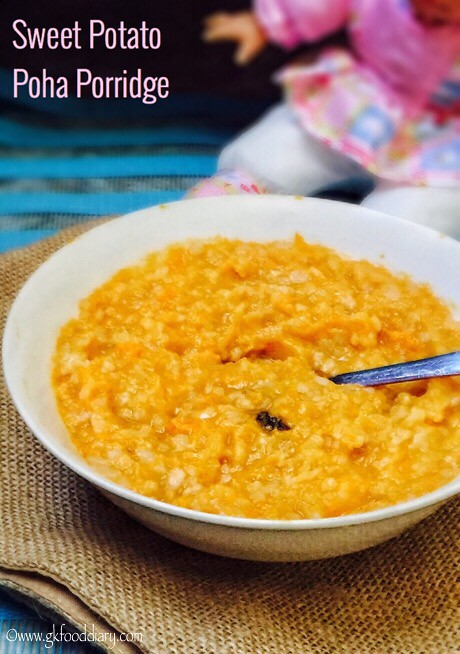 This wheat porridge is prepared with whole wheat flour, yellow moong dal, and almonds. Wheat can be introduced to a baby's diet after eight months as plain wheat porridge. If the baby is not showing any allergic reaction for wheat, try this wheat moong dal almond porridge. 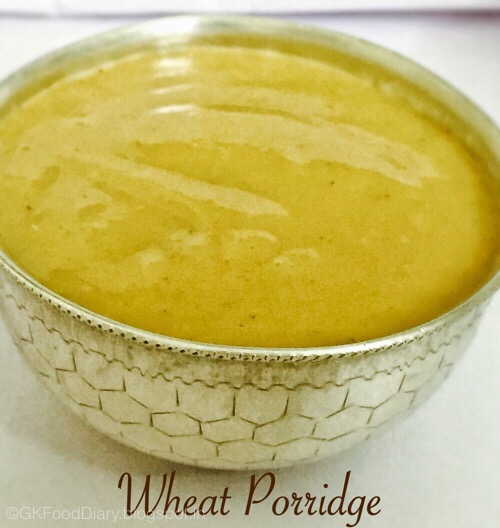 Cracked wheat, aka dalia, is rich in calcium, iron, and vitamins, which should be part of a child's healthy diet. This porridge is one of the best ways to include broken wheat in growing children's menus. This wheat porridge is made with dates to make it more healthy! 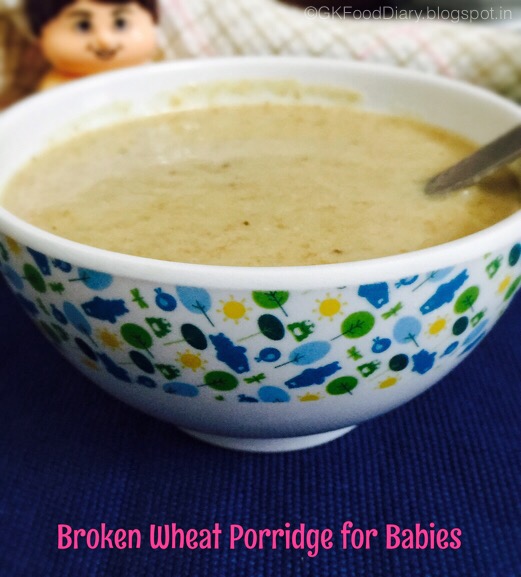 Urad dal is rich in calcium and helps in healthy weight gain in children. It's also suitable for pregnant women and lactating moms. 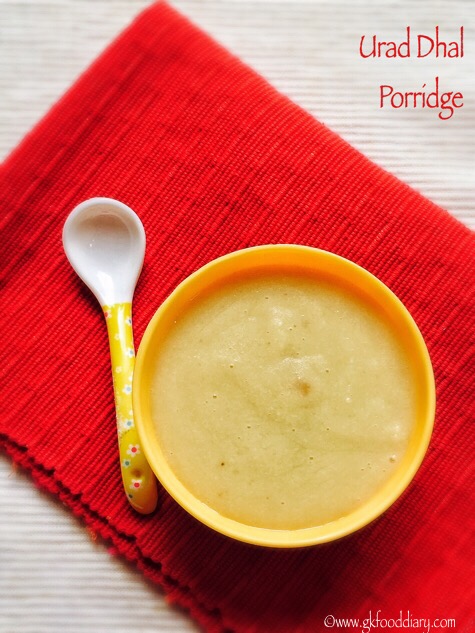 Homemade Cerelac is a health mix powder made with a combination of pulses, legumes, and nuts. Its the best weight gaining food for children and should be an essential part of growing children's diet. 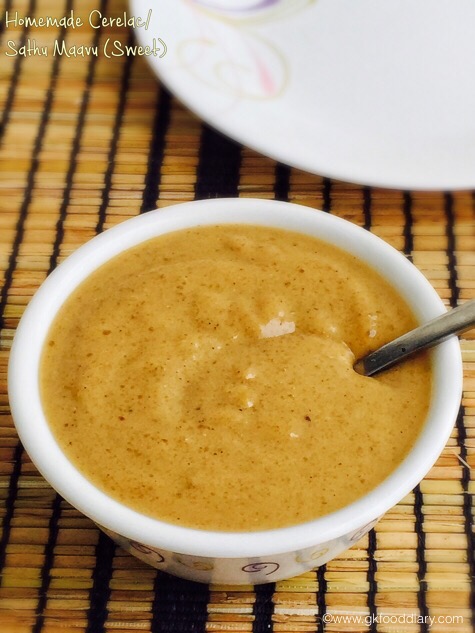 Oats is a fiber-rich food for babies that can be given from 8 months. This oats porridge is prepared with bananas to make it more healthy and wholesome. 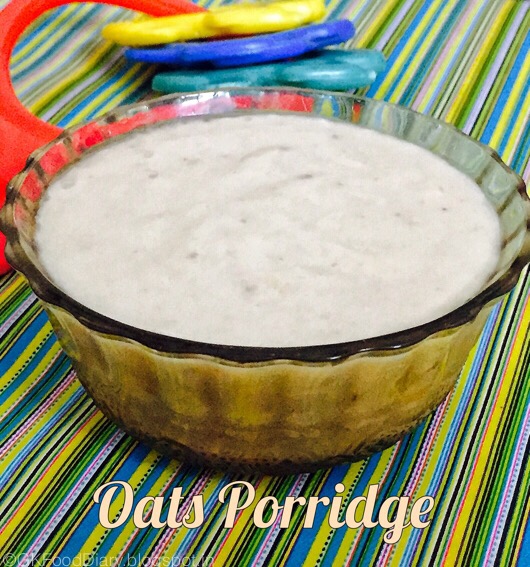 Iron-rich porridge made with bajra flour, which helps to maintain the hemoglobin levels of children. 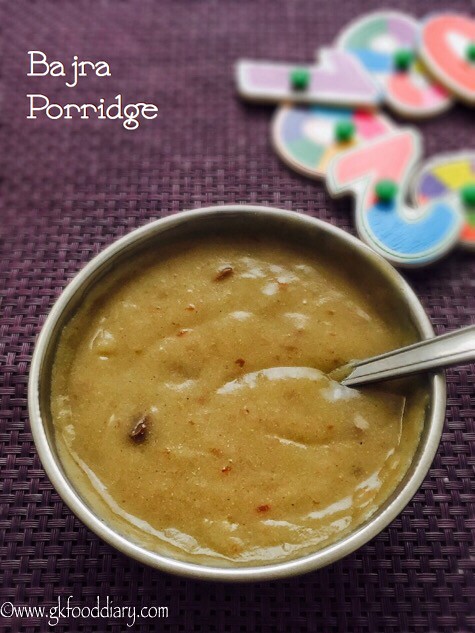 Sooji/Rava/cream of wheat is an easily digestible food for babies that can be given from 6 months. This sooji porridge can be prepared with breast milk or formula milk and sweetener as fruits for babies below one year. 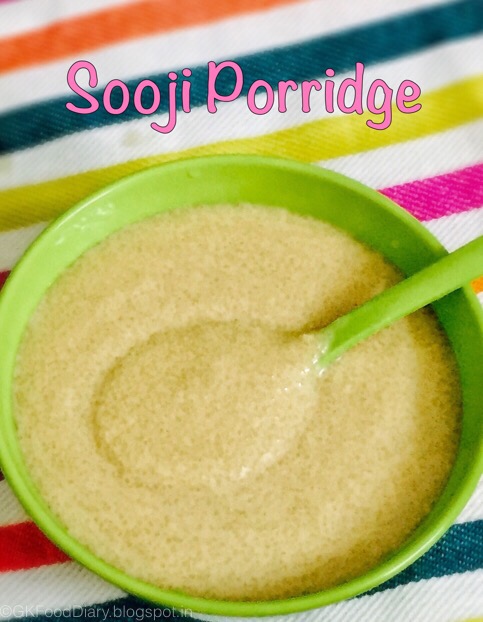 Green gram/green moong bean is protein-packed that can be introduced to babies after ten months. This green gram porridge is one of the delicious ways to include green grams in kid's diets. It's also ideal for pregnant women and lactating moms. 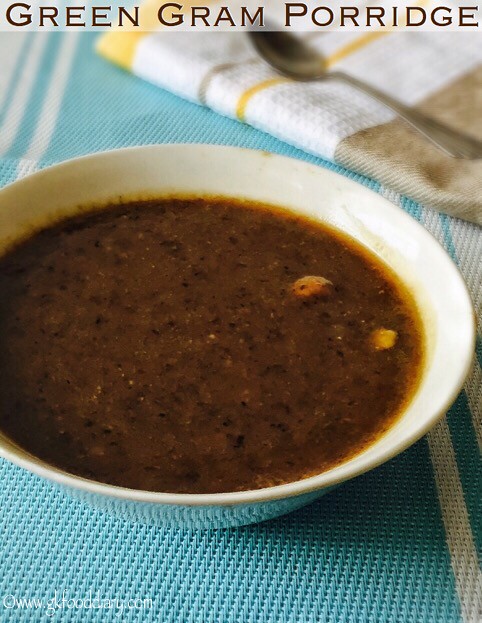 Rice milk porridge is made with rice, garlic, and cow's milk/ coconut milk. Ideal for children during sickness that helps to cure digestive issues. 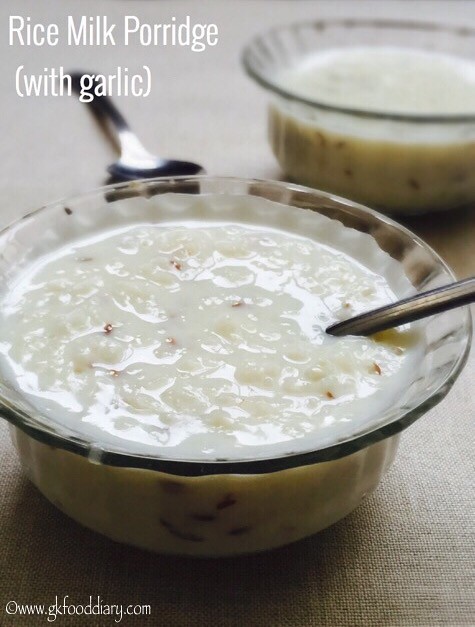 Oats Porridge – healthy porridge recipe made with homemade oatmeal cereal. This porridge tastes good even plain without adding any additional sweetener or salt 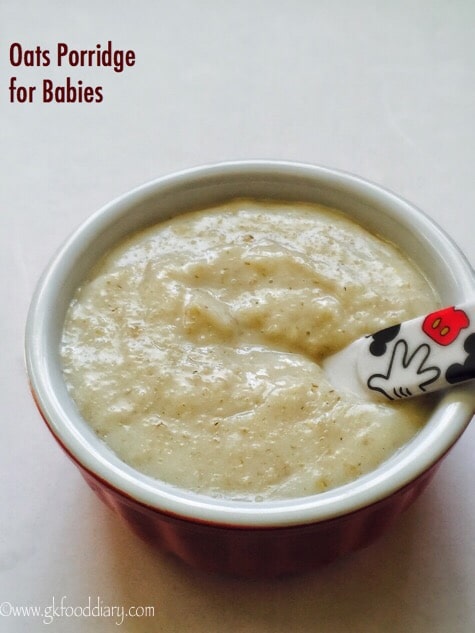 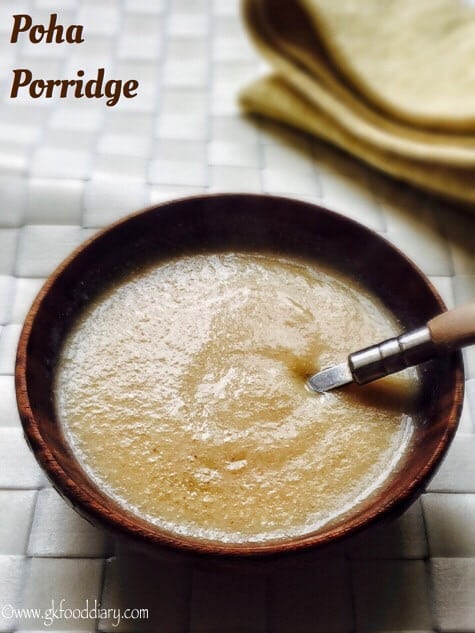 This oats apple porridge is a subtle variation to the regular oatmeal with the healthy addition of apples. It is light on the stomach, and hence it is perfect for breakfast or even dinner. 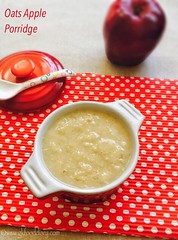 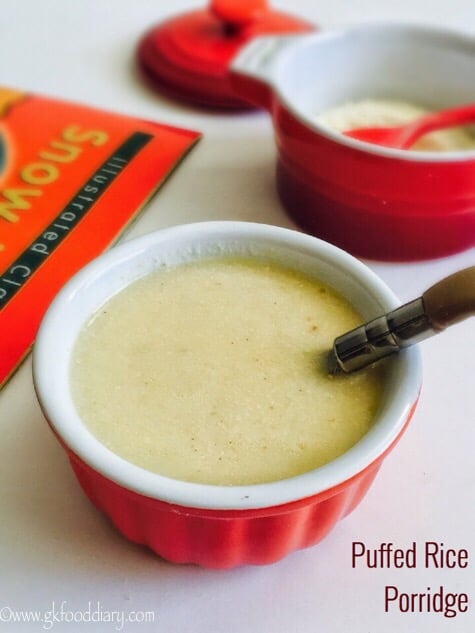 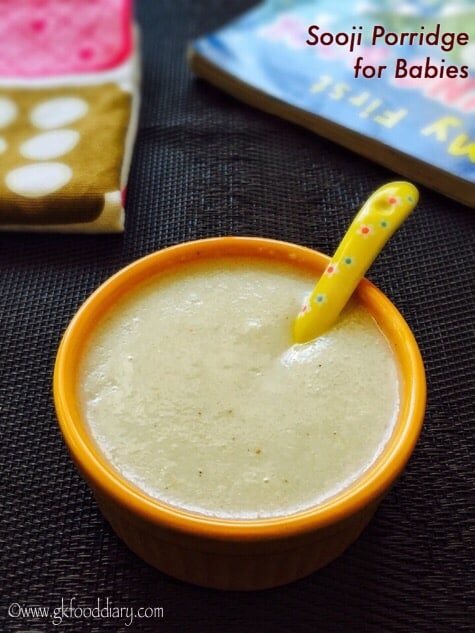 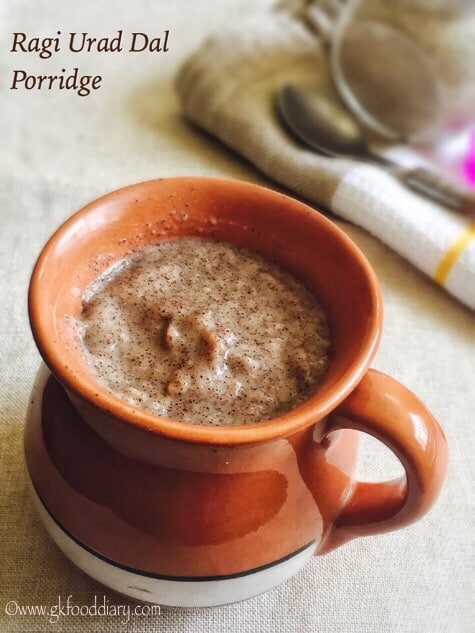 Sabudana Porridge is a healthy porridge recipe made Sabudana/sago/javvarisi and water or milk. 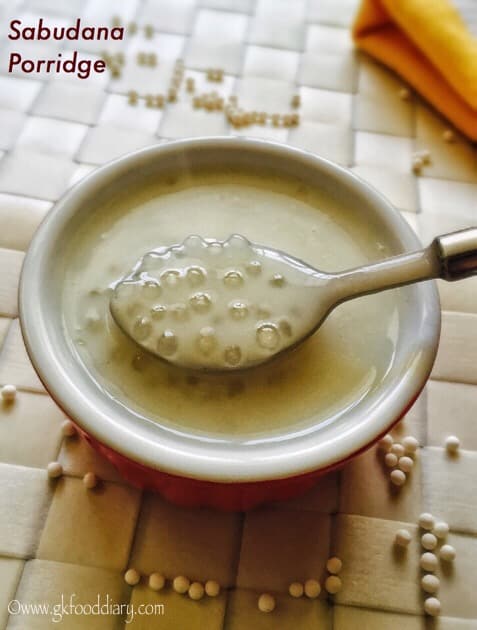 Rice Porridge is ideal for kids during fever and its made with diluted milk and ghee for added taste. 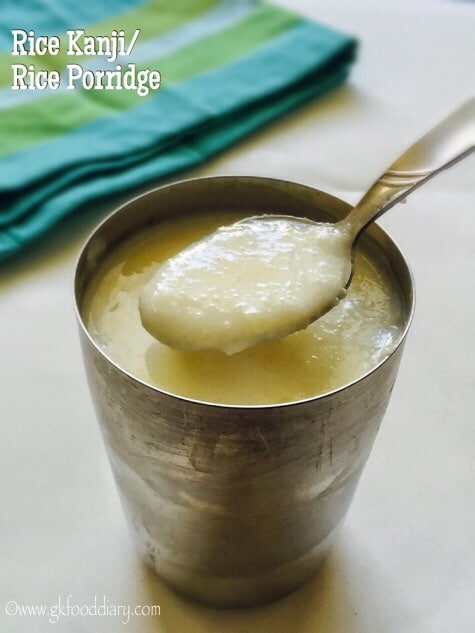 This site uses Akismet to reduce spam. Learn how your comment data is processed.

Can I give my Baby

Thanks for visiting my space and taking time to read about me. I am Kalyani and I live in chennai. I was working in IT industry as a software engineer for 7 years. I had to quit my job after my little one arrived and during this time I found my passion! Yes it's cooking and clicking and so this blog! Read More…